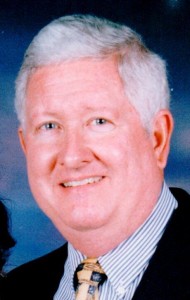 Tom W. Cardin, 71, of Nixa, Missouri passed peacefully at home on July 14, 2015. He will be greatly missed by his wife, Brenda, family and friends. Tom was born in Eldorado Springs, Missouri, in 1944 to Walton and Elaine Cardin and raised on a dairy farm in Beebe, Arkansas.
Tom graduated from Fort Smith High School. He attended the University of Arkansas. While attending college, Tom worked as a radio disc jockey and was editor of the school newspaper, The Arkansas Traveller. After studying journalism at the University of Texas, he returned to Fayetteville, Arkansas to attend law school and served as editor of Arkansas Law Review. He remained close to his law school friends and community of local lawyers throughout his life. Before moving to Cassville, Missouri in 1973, he practiced law in Batesville and Jonesboro, Arkansas. He practiced law in Cassville for 40 years while raising a family. He served on several boards and was an active member of the community and a longtime elder, Sunday school teacher and choir member of the First Christian Church.
On January 14, 2000, Tom married Brenda Stehlik and they made their home in Nixa. Tom had a deep love for his family and friends. His greatest love was for his Lord and Savior. He was an active member of the Ridgecrest Baptist Church in Springfield, Missouri and loved the Branches Sunday school class, which he taught.

While practicing law in Nixa and the Springfield area, he enjoyed serving various non-profit groups, particularly Rainbow Network (a ministry to the poor in Nicaragua) where he served on the board for many years. He enjoyed reading, writing, playing golf, floating the Buffalo River and spending time with family. He was a loving and devoted husband, father and papa to his grandchildren.
Tom was preceded in death by his parents, Walton and Elaine Cardin, and brother David. Tom is survived by his wife, Brenda; two children, Matt Cardin and his wife, Teresa, of Stephenville, Texas, and Dinah Cardin of Salem, Massachusetts, and their mother, Kay Baker, of Cassville. He is also survived by his two stepchildren, Chad Samuel and his wife, Jennifer, of Nixa, and Kelly Wilson and her husband, Tyler, of Springfield; six grandchildren, Danny Ray and his wife, Becky, Carlie, Sydney, Avery and Brooklyn; and two great-grandchildren, Wyatt and Gunner; and sister-in-law Judy Cardin; and two nieces, Tracy and Amy Cardin, of Oak Park, Illinois.
The service will be at 10 am Saturday, July 18 at Ridgecrest Baptist Church in Springfield. Burial following at Oak Hill Cemetery in Cassville, Missouri. Visitation 6 to 8 pm on Friday, July 17 at Greenlawn Funeral Home East. In lieu of flowers, contributions may be made to Rainbow Network at 2840 East Chestnut Expressway, Suite A, Springfield, Missouri 65802 or Children’s Ministry at Ridgecrest Baptist Church at 2210 West Republic Road, Springfield, Missouri 65810.