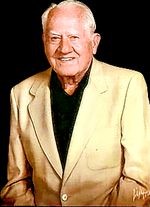 Walter O. “Wally” Lutz, 92, Springfield, Mo., passed away October 3, 2009, in Missouri Veterans Home. He was born in St. Louis on April 19, 1917. Wally served in the military in Europe for three years during World War II. He was self-employed with Lutz Excavating and L and P Construction Company. Wally was a member of First and Calvary Presbyterian Church and was an Abou Ben Adem Shriner. He enjoyed playing golf. He was preceded in death by his wife, Jewell Hughes. He is survived by his wife, Zola Spradling Lutz; children, MIke Lutz and wife, Sharon, Susan Malson and husband, Don, and Jane Jeffries and husband, Bill; step-children, Linda Stowe and Cassandra McGraw and husband, Kevin; grandchildren, Angela Lutz, Jennifer Lutz, Jill Fulks, John Jeffries and Andrew Malson; three step-grandchildren, Daniel Bunker, Tami Hartewick and Matthew Bunker; one great-grandchild; four step-great-grandchildren; and other nieces and nephews. Visitation will be in Greenlawn Funeral Home South on Sunday, October 11, 2009, from 4 to 6 p.m. Funeral services will be in First and Calvary Presbyterian Church on Monday, October 12, 2009, at 11 a.m., with graveside services following in Maple Park Cemetery. The family suggests memorial donations be made to Shriner’s Children’s Hospital or the donors choice.