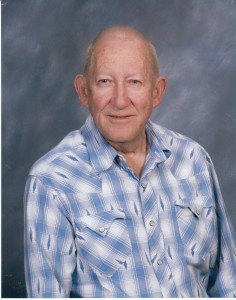 Walton Gene Krumholz, 79, of Springfield, Mo., went to be with our Heavenly Father on Monday, December 1, 2014 at 3:23 a.m. surrounded by his family.He attended several area churches and was a member of Sac River Cowboy Church. Walton was very proud that he helped open and close the Zenith Corporation in Springfield after thirty eight years of service. He later drove a dump truck for American Quarry for eighteen years.Walton had a love for music, bluegrass and gospel. He loved to play the guitar and piano. He was a member of GOBS (Greater Ozark Bluegrass Society). He received an outstanding volunteer award from Christian Health & Rehab, East.He was preceded in death by his parents; daughter, Virginia Krumholz; and an infant sister, Angeline.He is survived by his fiancée Sylvia Reeser of Rogersville, Mo.; two brothers, Ken Krumholz and Elton Krumholz & wife Shirley; three children, Barbara Campbell and husband Jeff of Willard, Mo., Daniel Krumholz & wife Linda of Ada, Okla., and Debora Duvall and husband Don of El Dorado, Kan.; stepchildren, Pat Corad, Denzil Cron, Coleen Barham, Connie Rowland and their families whom he loved and cared for as his own; three grandsons, Jeffery Campbell, Brett Krumholz and wife Lacey, and Adam Duvall; two great-grandchildren, Kyle and Makayla; along with numerous step grandchildren and great-grandchildren; one great- great-grandchild; along with a host of family and friends.Funeral services by Greenlawn North with Pastor Scotty Killingsworth and Lora Hobbs. Visitation will be held Wednesday, December 3, 2014 from 6 to 8 p.m. Funeral services will be held December 4, 2014, at 1 p.m. at the Funeral Home.Services have been entrusted to Greenlawn Funeral Home North, Springfield. Online condolences may be made at www.greenlawnfuneralhome.com.Special thanks to the staff at Christian Health & Rehab, Regional Hospice, his niece Brenda Halterman for all the loving care provided during his illness, his cousin Ellen Smith, lifelong friend of fifty years Sammy Johns and Sean McVay.