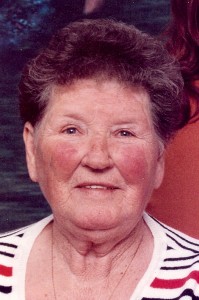 Wanda Elizabeth Mincks, age 82, of Bolivar, MO, passed away Wednesday, December 31, 2014, at Mercy Hospital Springfield, MO. She was born February 20, 1932, in Bolivar, MO, to William and Annie (Sanders) Lovell. She was united in marriage to Willard W. Mincks March 12, 1947.
She was preceded in death by her parents; two sons: Chesley and Raymond Mincks; three sisters and one brother; two grandsons: Michael and Shaun; one great granddaughter Angelina; and one great grandson David.
She is survived by her husband Willard Mincks of the home; four children: Larry Mincks, Marcella Scurlock, Anna Brown, and Willard Mincks, Jr. all of Bolivar, MO; 18 grandchildren, 36 great grandchildren and 7 great great-grandchildren; as well as numerous other relatives and friends.
Graveside services will be held at 11:00 AM January 12 , 2015, at Missouri Veterans Cemetery, Springfield, MO. Online condolences may be made at: www.greenlawnfuneralhome.com. Arrangements have been entrusted to Pitts Chapel Bolivar, MO.