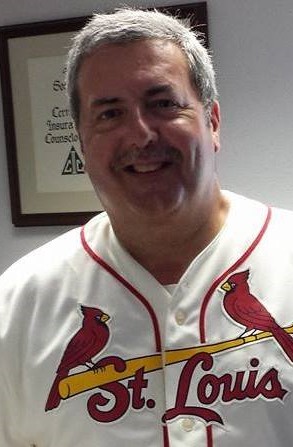 Warren Robert Collins (59) was born June 14, 1961 in Clarinda, IA and passed away March 9, 2021 at his home in Springfield MO, after a battle with cancer. He was the youngest child of Robert Lowell and Judith Blanche (Powers) Collins. In 1963 he moved with his parents to Lincoln, NE becoming a lifelong Cornhuskers fan. He moved to Springfield MO in 1971 and graduated from Kickapoo HS in 1979.  He attended SMSU and began working at his father’s business, Land O’ Lakes Insurors, as an independent insurance broker in 1981. He earned the designation of Certified Insurance Counselor in 1986 and attended the Commercial Union Commercial Lines School in Boston, MA in 1987.

He married his young love, Jane Elizabeth Abbott on September 29, 1984. They had two children, Alexander Robert, 1993, and Davis Warren, 1996. He bought Land O’ Lakes Insurors as his father retired in 2003 and owned and managed it until shortly before his passing.

He participated in recreational team sports in his youth and enjoyed bowling and golf.  He was an accomplished pianist, a talented grill chef, a St Louis Cardinals fanatic, and Kansas City Chiefs fan. He was an MSU Bears basketball season ticket holder for over 30 years, closely following every season. He enjoyed country music and 70s and 80s rock, loved the water and enjoyed boating with family and friends on Stockton Lake in his boat, the Oreo Cookie. He was an animal lover and shared his life with several dogs, cats, and pet Koi fish. He enthusiastically supported Jane in her dog training activities and took great pride in their achievements.  He was a member of Elks Lodge 409 for many years. His job as an insurance broker brought him into acquaintance with much of the community.  He had a wonderful sense of humor and genuinely cared and respected all people.  Honesty and integrity were of utmost importance to him, and he had many long-term business relationships with his clients, who also became friends. He had a deep love for his family and worked hard at his business to provide for them.

He was preceded in death by his parents, grandparents, and a sister.  He is survived by his wife and sons, Linda Kay (Wood) Collins, his Stepmother since 1983, his sister Kendra Wallace, and an endless catalog of friends.

A visitation will be held on Sunday, March 14 from 5-7 PM with funeral services on Tuesday, March 16 at 1 PM at Greenlawn East. Burial will follow at Rivermonte Cemetery.

Donations may be made to TASK9 Foundation: Rescue to Working Dogs, 1111 N. Boonville, Springfield, MO 65802.