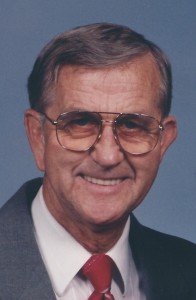 William Lyle Melton (Bill) was born to Roy and Edna Blevins Melton on April 2nd, 1928. He was welcomed by his parents, two brothers, and one sister. He left this Earth on December 2nd, 2015. He attended Tunas Consolidated School until graduation. Afterward, he was inducted into the United States Army and was trained for the Corp of Engineers at Fort Leonard Wood, Missouri. During the Korean War he served with the 1902nd E.A.B. At this time he was stationed at Wolters Air Base in Mineral Wells, Texas. He spent his time there learning to handle heavy machinery and working on building an airstrip. During this training he was awarded the Sharpshooters Medal for accuracy. On February 13, 1952 he and Chrystal True were married in Harrison, Arkansas. They began their married life in Mineral Wells, Texas while stationed at the air base.
After being discharged, they moved to Kansas City, Kansas where he worked for Seal Rite-iater moving back to Springfield where Bill enrolled at Southwest Missouri State College. They decided to make Springfield their home.
Bill worked at the corner of Glenstone and Commercial for 49 years. Fifty years ago, he started as a re-treader at Tiretown, later known as Purcell, INC. He went to school in Kansas City to train for the position as salesman. He began working with Michelin Passenger tires only. Later, the company moved into commercial tires. That location was owned by four different owners while he was there, each requesting that he stay with the company. Up until his retirement, he worked behind the front desk, quickly becoming efficient with a computer. He always enjoyed meeting the people who came in and looked on many of them as his special friends.
As a hobby, Bill enjoyed fishing and hunting. He spent many hours fishing with Chrystal’s dad. He also enjoyed buying houses to refurbish. At one time, he had eight of them. He liked the people he rented to and treated them with the same respect that he wanted to be treated. Some of them that started out as strangers have become life – long friends.
Bill and Chrystal traveled west, north and south over the United States, including Hawaii, St.
Thomas Island, Mexico, and Canada. For the past several years, most of the traveling has been to Florida and back to visit with their two sons and their families.
Bill is survived by his wife, Chrystal, of 63 years, one daughter, Lyddia Kelm and husband Jeff of Aurora; two sons; John of Coconut Creek, Florida and Steve and wife, Marlene, of Margate, Florida; Seven grandchildren; Michaela Thomson and husband, Jason of Hollister, Missouri; Billy Stokes and wife Shannon of Nixa, Missouri; Rhiannon Chickvary and husband, Steve of Guntherville, Alabama; Erika Kelm of Springfield, Kasey Kelm of Bentonville, Arkansas; Elaine King of Coral Springs, Florida; Justin King and wife Jocelyn, of Coral Springs, Florida. He is survived by six, great- grandchildren: Elijah Weaver, Kaitlynd Hassinger, Michaela Chickvary, Logan and Kaydn Stokes, and Zoe King. One sister, Beulah Lusk of Eureka, Missouri; one brother. Kenneth Melton and wife. Carlene of St. Charles, Missouri.
Three sisters-in-law: Avaline Harris of Springfield, Mildred Melton of Buffalo, and Carlene Melton of St. Charles. Three brothers-in-law; Wayne True of Corder, Missouri; Bertram True of Urbana, Missouri; Daryl True of Imperia” Missouri.
He is preceded in death by one daughter, Thresa Reed; his parents Roy and Edna Melton; four brothers; Bertram, Buel, George and Dale Melton, one sister Shirley Green. His other parents, Roy and Bethel True; five sisters-in-law Sylvia True, Helen True, Berniece True, Macy True and Ruby Melton. Three brothers-in-law Jim Harris, Leroy Green, and Frank Lusk and one nephew, Marcus Harris.
He will be also missed by several nieces and nephews and his beloved little dog, Heidi. Bill loved his family more than life itself.
He will be remembered for his love of family, his love of life, and his honesty and integrity in hls daily living and in his business practices.
Services for Bill will be at 2:30 P.M. Saturday. December 5, 2015 at Central Christian Church with visitation from 1:30 to 2:30 P.M. prior to the service.
In lieu of flowers, contributions may be made to Central Christian Church 1475 N. Washington 65803 and the Humane Society of Southwest Missouri at 3161 W Norton Rd 65803.