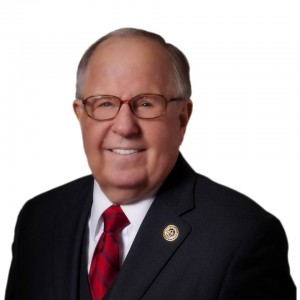 William R. (Bill) Compere was born August 24th, 1938 in Holdenville, OK to William L. Compere and Dixie L. (Russell) Compere. He died July 8, 2015 from complications from Myelodysplastic Syndrome.
Bill graduated from Southwest Missouri State College (now MSU) and was a CPA for nearly 50 years. He was a partner with Compere and Robinette, CPA’s at his retirement from public accounting in 2000. Bill went on to other careers with the Urban Districts Alliance, CJR Commercial Realtors, and served as the Greene Country Treasurer.
Bill volunteered in the Springfield community for 50 years. The most noteworthy were as the original treasurer of Ozark Greenways for 9 years, the chair of Vision 20/20 (Springfield’s long-range planning committee), and chair of the Jordan Valley Park Advisory Committee. He was a Rotarian in two clubs for a total of 20 years. He was a member of the National Avenue Christian Church.
Bill was preceded in death by his parents, his sister, and his first wife, Judith A. (Judy) Compere. He is survived by his wife Anne M. Cox, sister Lucille Sjoblom of Jefferson City, and, children Douglas Compere of Denver CO, Deborah Compere of Fordland, MO, and David Compere of Springfield, MO, step-children Spencer Cox of Springfield, MO, and Newton Cox of Los Angeles, CA and their families, and many loving relatives and friends.
A celebration of life service will be held Sunday, July 12th at 3PM at the National Avenue Christian Church, 1515 South National Ave. A reception and buffet will follow the service in the “Gallery” at NACC. In Lieu of flowers, contributions are suggested for Ozark Greenways at Community Foundation of the Ozarks, PO Box 8960, Springfield, MO 65801 in Bill’s honor.