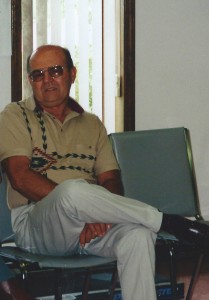 Funeral services for William R. Large, Jr. age 81 of Branson, Missouri will be held at 6:00 PM, Friday, April 8, 2016 at Greenlawn Funeral Home in Branson with David Burton and Bob Gard officiating.
He passed away on April 4, 2016 at his home in Branson, Mo.
Bill was born on August 2, 1934 in Wichita, Kansas the son of William Robert Large Sr. and Opal Marsha Corbin. He was a longtime resident of the area and worked on the construction of Table Rock Dam and participated in construction on several roads and dams in Northern California. He was the owner of Bill Large’s Mobile Home Service from 1968 until the present and was a member of the Hollister Church of Christ. Bill was a graduate of Hollister High School with the class of 1953.
Survivors are his wife, Barbara Smith Large of the home. Two daughters; Becky L. Burton (Greg) of New Albany, Indiana and Brenda S. Large of Forsyth, Missouri. One brother, Charles C. Large of Branson, Mo. Four grandchildren, David Burton (Sunny), Andrew Burton (Margaret), Amanda Haun (Korey) and Kathy Cochran. Ten great grandchildren, Bella, Izack, Afton, Kiera, Emilynn, Montana, Gaige, Ceth, Brylei and Kaidyn. A longtime employee and friend, Fred Sprecher. Bill was preceded in death by his parents and a brother, John D. Large.
Visitation will be from 5:00 until 6:00 PM prior to service time at the funeral home.