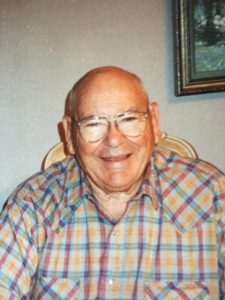 William Wendell Vick, age 94, devoted husband of Shirley M. Vick, his wife of 66 years,died on September 18, 2016, from complications associated with Alzheimers while inMercy Hospice care in Springfield, Missouri. He was born in Polo, Missouri, to Fred and Sara Vick on April 23, 1922. Bill graduated from Polo High School and went off to Washington, D.C. to work in the Motor Vehicle Department of the Armed Forces. A lifelong and proud Democrat, Bill was invited as a personal guest of Harry Truman’s vice presidential inauguration. Such an historic honor! But Bill declined the invitation stating that he had tickets and a date for a new movie opening, a movie called “Gone With The Wind”. He missed the inauguration and many times during his life spoke of how he regretted that decision. After Pearl Harbor was attacked, Bill enlisted along side a friend of his to honor his Polo friends who had been killed in the Pearl Harbor attacks. He was an Aviation Machinist’s Mate First Class, flying in PBYs that scoured the South Pacific looking for enemy submarines and planes. Bill ended his career as an instructor in the Navy teaching others how to be machinist’s mates. He was honored with a Good Conduct Medal, a North African Campaign bar; the American Theater bar, the Asiatic-Pacific Bar and his Air Crew Wings. When the war ended, Bill returned to the Kansas City area where he used the G.I. Bill to attend William Jewel College and graduated with a Bachelor of Science degree from UMKC. Following graduation, he worked many jobs including publishing the “Adrian Journal” along with his wife; and he worked as a top salesman for Brown and Bigelow earning many awards from them. Bill decided to pursue his true calling in life and returned to UMKC for his Masters in Education. Once graduated, he was hired by the Shawnee Mission School District as a Unified Studies teacher at Hocker Grove Junior High. Dr. McEachen increased his responsibilities and brought him to Shawnee Mission East as a teacher and later as a vice principal. From this school he was sent to establish a new school, Shawnee Mission Northwest, which became his passion. He was truly in love with every facet of that school and its students. Eventually he was sent to Hocker Grove Junior High, the school where he began his career, in order to bring the future of education and technology to it. He had the most professional and devoted faculty there and stayed at Hocker Grove until he began his retirement in 1981. Bill met the woman of his dreams at UMKC. Miss Shirley Lyons caught his eye and they were married in 1950. They truly formed a loving partnership in life. Shirley supported and cheered on each adventure he undertook. The two of them would discuss theories and trends in educations as equals. Their secret for the success of their 66 year marriage was to never go to bed mad. Three daughters were born within a four year period; Crystal (Joe) Fortune, Becky (Jim) Todd and April (Tom) Jones. And each of them adored their father. In 1981, Bill and Shirley became residents of southwest Missouri, living the longest and happiest time at Pomme de Terre Lake. They helped establish the Wheatland Volunteer Fire Department, were members of the Elkton Saddle Club and were very active in political and humanitarian projects in the area. When age began to take its’ toll they moved to Bolivar and then to Springfield. In 2013, as Alzheimer’s slowly claimed his body, Bill moved to the Missouri Veteran’s Nursing Home in Mt. Vernon, Missouri, where he received the best of care that home could no longer provide. We are so grateful for all of the aid and compassion their staff gave us, particularly Patty, the best head nurse ever, and Theresa, the most compassionate social worker we’ve ever met. Extraordinary efforts made by these two and their miracle working staff, that made it so that we could sleep soundly at night. Bill leaves behind a devoted wife who still resides in Springfield, Missouri, three daughters who live in Ozark, Missouri; Sarasota, Florida; and Olathe, Kansas; four grandchildren, Cliff (Tracie) Jones, Tiffany Todd, Toby Todd and Alexis (Eric) Duncan; and six great grandchildren, Qwinn Jones, Ellie Jones, Carsyn Burger, Levi Duncan, Derek Duncan and Brooklyn Duncan.
A private ceremony will occur at a later date. It is our hope that everyone whose life he touched will carry on his caring ways. He truly was a strong believer in education being the great equalizer for everyone.
We have all just begun to miss him.