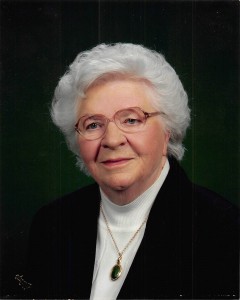 Willie Jean Doty, 87, of Springfield, MO passed away April 16, 2016, at Mercy Hospital in Springfield, MO. She was born February 26,1929 in Mt. Vernon, MO. Willie attended Cassville High School and graduated in 1947. She later graduated from Mercy Hospital School of Practical Nursing in Springfield and became an LPN in 1962. She retired after 20 years. On August 22, 1951 she married Jessie A Doty in Eureka Springs, Arkansas.
Willie was a Charter member of East Grand Church of Christ. Willie did a lot of volunteering and community services, she did transportation for the church, clothing drives and food donations. She loved to grow flowers and vegetables.
Willie was preceded in death by her husband; Jessie, sisters, Mildred Anderson and Wanda Bohmback, father William E Painter, mother, Nevada McCracken Painter, brothers-in-law, and sister-in-law, Cleo Doty, Claude and Virginia Doty, Clyde and Reba Jones, Don and Herma Edwards, Bob Bohmbach, R.G. Anderson. Willie is survived by two children, Beverly and Tim McNeese, Anita Doty-Lewis and a former son-in-law, Wes Lewis. Four grandchildren, Noah (Kara) McNeese, Summer (Mark) Dickinson, Madelyn (David) Rogier, Adam Lewis. Six great-grandchildren, Ethan, Finn, Beckett, Atticus Dickinson, Adrianna and Cora McNeese. One sister, Edith Ashburn, also surviving her are numerous nieces, nephews and many other relatives. Services for Willie will be in East Grand Church of Christ on Saturday, April 23, 2016 at 10:00 a.m. with visitation on Friday, April 22, 2016 from 6 to 8 p.m. in Greenlawn Funeral Home South.