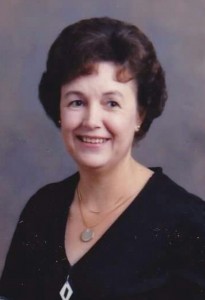 Wilma Claudine Stiles Fender McLean
Born October 30th, 1933 in Iowa City, Iowa Died April 16th in Fenton, Missouri
Our beloved Mother, Wilma McLean, passed from this life to her eternal reward Thursday, April 16th in Fenton, Missouri. She will be sorely missed by her family and fondly remembered by the many whose lives she touched.
Wilma was born to Asel and Florence Halbert Stiles on October 30th, 1933 in Iowa City, Iowa. She spent her childhood years in the loving home of Minnie Lukeheart and her son Lester in Red Oak, Iowa. She attended Red Oak High School and played clarinet in the marching band.
She married Edward Dean Fender of Imogene, Iowa in 1948. They were married 25 years and had five children. They lived most of their married life on a farm near Emerson in Mills County, Iowa. She was a member of the Emerson, Iowa Eastern Star Lodge and served as Worthy Matron. She attended the Emerson Methodist Church and was an active member of the Women’s Circle.
In 1973 she graduated as a Registered Nurse in the first nursing class offered at Iowa Western Community College in Council Bluffs, Iowa. On the Iowa State Board of Nursing examination she received the highest score in her graduating class.
She began her nursing career in Miami, Florida at the Veteran’s Administration Hospital later working in Homestead, Florida at the James Archer Smith Hospital. In 1980 she moved to Springfield, Missouri and worked many years for both Saint John’s Hospital and Cox Hospitals, ending her nursing career as Night Supervisor at Cox Hospitals.
In 2002 she married long time friend, Richard McLean. They spent 10 very happy years together until his passing in 2012. She and Richard were active members of the Springfield Seventh Day Adventist Church and were active in the Senior Group at South Haven Baptist Church.
During her lifetime she enjoyed the outdoors and nature, dancing, bowling, and reading but her greatest pleasure was her family which grew to include 16 grandchildren and 18 great-grandchildren all of whom she cherished.
She was preceded in death by her mother Florence Halbert Stiles and her father Asel Stiles, her sisters, Pauline Paulson, Bernice Johannes, Grace Shannon, Mary Sorenson, Ardyth Horton, nephews Robert and Darrell Paulson and her husband, Richard McLean.
She is survived by her children Terry and Henry Surls, Edward Dean and Pamela Fender, Darrell Fender, Douglas and Theresa Fender and Craig and Gina Fender. Her grandchildren, Jason Marshall, Kimberly and Steve Miljatovic, Elena and Sean Stewart, Karina and Clement Fauchere, Sarah Fender and Shad Schmutz, Jacob and Lara Fender, Jesse Fender, Angela Fender Bradley, Rebecca Fender, Megan Fender, Jeremy and Sara Fender, Jeffrey and Misty Fender, Jordan and Maria Fender, Tiffani and John Gosa, Tricia Fender and Tyler Fender. Her Great-grandchildren, Kristian, Evan, Alyssa and Vanessa Miljatovic, Aramis Fauchere, Brandon Frye, Garrett Schmutz, Penelope and Eloise Fender, Hannah Bradley, Clarissa Fender, Grant Schnoor Jr., Siah & Violet Fender, Hadassah Fender, and three more great grandchildren due to be born this spring that she was so looking forward to welcoming into the family. Her nieces and nephews, Linda Horton McDaniel, John Horton, Steve and Pam Horton, Julie and Paul Welcome, Sandy and David Kittle, Douglas and Priscilla Horton and Brian, Cheryl and Barbara Sorenson.
Her services will be held at the Greenlawn Funeral Home East, 3540 E. Seminole in Springfield, MO. Visitation is Saturday, April 25th from 6 to 8 p.m. The Funeral service will be Sunday, April 26th at 1:00 p.m. Wilma will be laid to rest with her beloved husband Richard McLean Monday, April 27th at 10 a.m. at the National Veteran’s Cemetery South in Springfield, Missouri.