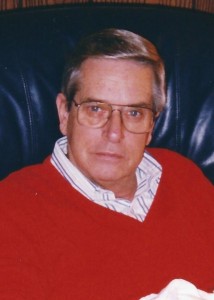 Wilson Parker Burns, Jr. (Bill), 75, passed away peacefully on Monday, November 23, 2015 in Springfield, Missouri. He was born in Youngstown, Ohio to Wilson and Margaret Jane (Nowels) Burns on May 6, 1940 and grew up in Sharon, PA.
Bill married Sadie Lee Oliver on January 1, 1963. They had four children, Gerald Burns, Fredrick Burns, Cheryl (Burns) Benton and Christopher Burns.
After graduating from Mercersburg Academy, Bill was a paratrooper in the 82nd Airborne Division as a command Sergeant in the Army. He then attended Cornell University, graduated from Augustana College, and studied for his MBA at the University of Iowa.
Bill lived in Moline, IL, Howell, MI, Fort Wayne, IN and moved to Springfield, MO in 1975 which became his long-term home. He was employed by Deere and Company and related companies for 30 years. After retiring, he worked at Reliable Imports & RV.
Bill is survived by his wife Sadie; four children, Jerry Burns, Fred Burns, Cheryl (Burns) Benton and Chris Burns; 10 grandchildren; and 17 great-grandchildren; and his sister, Deborah Burns.
He was preceded in death by his parents and his sister Olivia (Burns) Ide.
A memorial service will be held on Friday, November 27 at 1:00 pm at Greenlawn East, 3540 Seminole, Springfield, MO. A private graveside service at the Missouri Veterans Cemetery in Springfield will be held at a later date.
The family would like to express their gratitude to the members of the Mercy Hospital 4E ICU. In lieu of flowers memorial donations may be made in the name of Wilson P. Burns to Mercy Hospice and Palliative Care, 1570 West Battlefield, Suite 110, Springfield, MO 65807.