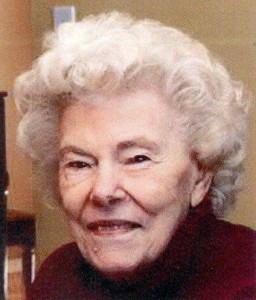 Winifred E. Garrett age 95, Springfield, MO, formerly of Jefferson City, passed away on Tuesday, April 28th, 2015. She was born on Dec.12, 1919. She worked as a microbiologist for the Missouri State Laboratory in Jefferson City, MO.
Winifred was a member of the Ashland Baptist Church in Ashland, MO and First Christian Church in Jefferson City, MO. She was a member of the Eastern Star Victoria Chapter 14 of Jefferson City, MO, and Daughters of the American Revolution. Her hobbies included gardening, reading novels, and being very active in church, the community, and the Eastern Star.
Winifred was married on July 29, 1955, in Greenfield, Iowa, to Leonard Garrett. She was preceded in death by her husband, Leonard Garrett; her parents, Blanch R. Pinckney and Ernest E. Pinckney; a brother Harold M. Pinckney, 2 stepsons Robert Garrett and Paul Garrett. She is survived by one stepchild, Marilyn (Glen) Hardison; 5 grandchildren Nolan Hardison, Alice Wingo, Jennifer Jones, Stephen Hardison, and Susan Hooge; and 10 great-grandchildren.
There will be a graveside service on Monday, May 4, 2015, at 10 a.m. in Maple Park Cemetery in Springfield, MO. Services have been entrusted to Greenlawn Funeral Home South.