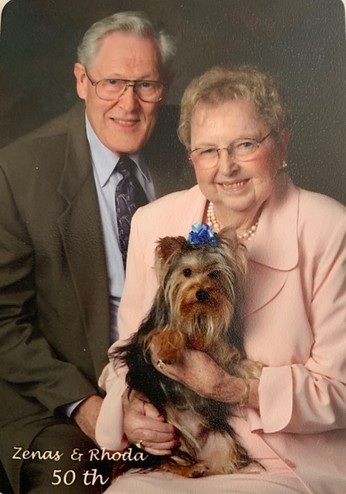 On September 17, 2020, Zenas Johan Bicket—academician, administrator, author, theologian, family man, and follower of Christ—finished his earthly course, having fought a good fight against Alzheimer’s disease and having kept the faith. He was born October 14, 1932, in Hartford, Illinois, the first child of Rev. Paul J. and Marie Bicket.
A snapshot of his life at the age of 14 foreshadowed the manner in which his entire life would ultimately develop: the outstanding student had announced his intention to become a teacher; he was faithfully serving God in his pastor father’s church; and he had a sweetheart from Bible camp, Rhoda Price, who would one day become his wife.
After graduating from Wisconsin Rapids High School (1949) at the age of 16 and the University of Wisconsin-Whitewater (1954), Zenas and Rhoda married on August 28, 1954, and moved to Springfield three days later. “We came to Springfield on our honeymoon,” he would explain, a twinkle in his eye, “and the honeymoon never ended.” Three children—Debbie, Dan, and David—followed shortly. He enrolled at Central Bible Institute, where he was soon invited to teach English while he earned two more degrees (1956, ’57). He taught at CBI from 1955 to 1961 and then was given a scholarship to attend the University of Arkansas in Fayetteville, where he earned his master’s (1963) and doctoral (1965) degrees.
The family then moved back to Springfield, where he taught English and served as academic dean at Evangel College. For a time, the family of five lived on campus in the tiny old barracks that served as dorm rooms. Dr. Bicket became dean of curriculum instructional design at Berean College (now Global University) in 1985 and its president in 1989, retiring in 1999. He traveled to India, Africa, and China to teach in Bible schools and ministers’ institutes. In 1999, he earned the AG’s Distinguished Educator Award.
When he wasn’t teaching or administrating, Dr. Bicket often was writing. Books he authored or coauthored include Walking in the Spirit, The Spirit Helps Us Pray, The Effective Pastor, The Pentecostal Pastor, And He Gave Pastors, The Holy Spirit in Christian Education, and We Hold These Truths, a book on the Assemblies of God’s cardinal doctrines and how to teach them. He also authored the AG’s sixth-grade doctrine course, Foundations of Faith, several Berean Bible courses, and numerous articles. For many years, he was the Bible and doctrine editor for the Sunday School curriculum department. He served as chairman of the commission on doctrinal purity of the Assemblies of God, and he was instrumental in writing the denomination’s official position papers on many difficult issues. He was a member of the board of review for The Complete Biblical Library and the chairman of Gospel Publishing House’s manuscript committee. For years after retiring from Global, Dr. Bicket labored on, answering the most difficult Bible and doctrine questions sent to the Assemblies of God.
Dr. Bicket loved to read, study, and think deeply, but he also relished practical application and ministry. One of his favorite ministries was teaching the couples’ class at Central Assembly with Rhoda. There they encouraged each others’ spiritual growth, enjoyed sweet fellowship, and cultivated lasting friendships. Some of these friends walked with Zenas and Rhoda through years of illness, loss, and sorrow, brightening even their darkest days.
Yet even greater than all of Dr. Bicket’s accomplishments was the sort of man Zenas was and the example he set for his his students, his colleagues, and especially his children. The patience, gentleness, kindness, love, and respect with which he cared for Rhoda, long immobilized by rheumatoid arthritis, impressed many but had a profound impact on their children. When Rhoda died and Zenas increasingly struggled to hide the failing of his mind, Debbie, Dan, and Dave stepped up, as their father had shown them to do. In spite of the miles, jobs, and other obligations, with patience, gentleness, kindness, love, and respect, the three stayed with their father in shifts, enabling him to remain in his home until his final months. In nearly 15 years of worsening illness and 6 years of needing their constant custodial care, Zenas continued to teach some of his most important lessons: you can’t say “I love you” too many times; a compliment is a gift that costs nothing; empathy and sweetness come from the heart and so don’t fail as the mind does; you can face your worst fears with courage; God never stops speaking to and through us; God knows what we need and is always on time; once a Badger fan, always a Badger fan; and you can feed a dog too many bananas.
Zenas fought his good fight with grace, good humor, humility, courage, and unshakable faith. He has finished the course (A+, Professor Bicket!), leaving an example of excellence for us to follow.
“I have fought the good fight, I have finished the course, I have kept the faith. Now there is in store for me the crown of righteousness, which the Lord, the righteous Judge, will award to me on that day—and not only to me, but also to all who have longed for his appearing” (2 Timothy 4:7–8).
Zenas was preceded in death by his parents, wife Rhoda, and brothers James and Philip. He is survived by his brother David (Michele) Bicket; children Debbie, Dan (Debbie), and David (Paula) Bicket; grandchildren Lori and Chris (Laurie) Gaulter; several great- and great-great-grandchildren; niece Tammy Bicket; other nieces and nephews; and many friends.
His family thanks special friends Diane Rentschler and Roger and Bonnie Cotton for their faithful love and many kindnesses and Jane Renner for her invaluable assistance. The Bickets are grateful for the expertise, guidance, and care of Kylie at Hopedale Cottages and Randy and the team from Terrace Home Health and Hospice.