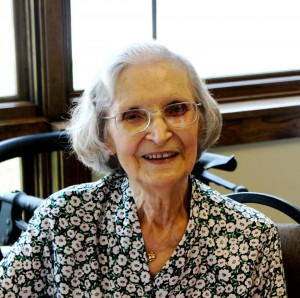 Zerita Walker, age 92, went home to heaven on July 25, 2015. She leaves behind her husband of 73 years, Maurice, their six children, and a large family of grandchildren and great-grandchildren. Their children are Mauri Walker (Dianne) of Green Valley, AZ; Alan Walker (Kathy) of Lake Charles, LA; Linda Payne (Ed) of Des Moines, IA; Cheryl Scott (David) of Richardson, TX; David Walker (Kay) of Rose Hill, KS; and Joe Walker of Springfield, MO. Their grandchildren are Mark Walker (fiancée Deanna) and daughter Taylor; Doug Walker (Annette) and children Allison, Joshua, and Judah; Randy Helt (fiancée April) and children Kyler and Madison; Allison Mingo (Chevas) and sons Drake and Joshua; Sarah Payne; Caton Walker (Kathleen); Daniel Walker (Erica) and children Waylon and Maci; Cody Walker; Michael Scott (Natalia); and Amy Sandoz (Dan). She was preceded in death by her parents, Zeth and Dora Caton, and siblings, Clyde, Virgil, and Dorothy.
Zerita was born on June 23, 1923, in Mattoon, IL. She was an accomplished musician and songwriter, and played piano and organ throughout her life (the week before she died, she told family she was sure there would be Hammond organs in heaven). She studied organ at Millikan University in Decatur, IL, and also attended Utterback Business College in Mattoon, IL. Upon graduation, she was the secretary for the National Youth Association, which trained machinists for the World War II effort. In 1942, Zerita married the love of her life, Maurice, her “Mr. Wonderful.” They both gave their hearts to the Lord in 1955 as the result of an Oral Roberts Crusade, and Maurice consequently became an Assemblies of God pastor. They faithfully served churches in Davenport, Hampton, and Ft. Madison, IA, from 1966-1970; Cambridge, MN, from 1970-1973; and Pratt, KS, from 1973-1989. Upon retirement, they pastored part-time in Mustang, OK for a number of years before moving in 2007 to Maranatha Village in Springfield, MO, where they maintained an active ministry. Zerita played piano for Sunday services at the Maranatha Manor up until the month before her death. Even in the last few days of her life, her primary focus was witnessing to those who came to say goodbye, making sure they knew Jesus as their Savior. Her love for the Lord and desire that all should know Him were at the heart of who Zerita was.
Memorial Services will be held on Saturday August 1, 2015 at 1:30 p.m. at the Maranatha Chapel at 233 E Norton Road, Springfield, MO 65803. Visitation will immediately follow the services in the Chapel Foyer.